Jamaican Boxing Federation: When women rise, communities rise with them 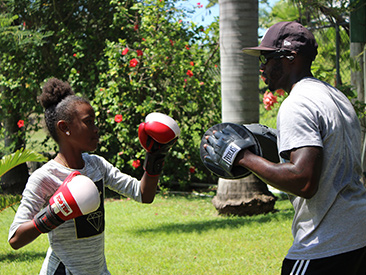 A case study from the Gloves Over Guns project; an initiative from the Jamaican Boxing Association. “Boxing is building protective factors in young women’s lives, and linking them with opportunities to progress in sports and education.”

Guns fuel the escalating homicide rate in Jamaica, but some communities are more severely affected by gun violence than others. In 2013, 90% of homicide victims and perpetrators were poor, young, men and boys living in underserved inner-city communities. Young women and girls from those same communities are disproportionately more likely to be victims of other kinds of violent crime, including rape, domestic violence, and child abuse.

The sport of Boxing is a proven platform for engaging young people at risk of being victims or perpetrators of violence, and supporting their personal development. Gloves Over Guns is an initiative that was created by the Jamaican Boxing Association (JBA) as a response to rising gun violence involving young people.

While the programme is open to everyone, young women have particularly excelled. Jamaica has even gained their first female junior Caribbean champion through this initiative. Let’s now see how this initiative has changed the lives of many young people and especially women and girls in Jamaica.

Gloves Over Guns would not be possible without the input of multiple network partners working together, contributing to the programme according to their strengths and resources. Being part of the network has given the Jamaican Boxing Association the knowledge and experience required to take the Unity and Peace model elsewhere in Jamaica through Gloves Over Guns.

Young women and girls in communities affected by violence in Jamaica suffer disproportionately from the impacts of that violence. Girls under the age of 16 are the victims of 32% of all sexual offences committed in Jamaica. Young women and girls are more likely than their male peers and siblings to experience physical abuse by one or more of their parents, and become victims of intimate partner violence later in life.

A baseline evaluation of the programme in the communities where Boxing programmes take place found that young women and girls feel vulnerable to sexual harassment and assault simply when walking around their own neighborhood – from their home to the boxing gym, for example.

In this context Boxing is building protective factors in young women’s lives, and linking them with opportunities to progress in sports and education, and develop as young leaders, through Gloves Over Guns. Beyond sporting success, Boxing combined with personal development has boosted young women’s self-esteem and confidence, and helped them to deal with the trauma and anxiety that comes will growing up surrounded by violence.

To date Gloves Over Guns has reached 823 young people, 42% of them young women and girls – a high participation rate compared to most countries which may well be due to the personal and sporting success of Jamaica’s first female junior Caribbean champion, 17-year-old Kerrone Thomas.

A very encouraging sign to indicate that Gloves Over Guns is on the right path is the buy in of other credible entities islandwide. Now the ultimate goal is to have the programme permeate every community throughout the country.

Having launched the programme in Jamaica’s second biggest city; Montego Bay, has captured the attention of the chamber of Commerce which has come on board and through their efforts, funding was raised to open a second National gym which will act as the hub for Gloves Over Guns where all the community members in that city can converge.

In addition, the Jamaican Boxing Association has been included in the HOPE Programme partnership with Gloves Over Guns; a very new initiative being supported by the Government as well as private sector and nongovernment development partners. Initially a ‘trade skills training’, the HOPE Programme now includes sports as a model a partnership with Gloves Over Guns provides that avenue.

Lessons learned that could be translated elsewhere

Young women and girls face a range of challenges that make it harder for them to regularly participate in sport. They are more likely than young men and boys to have responsibility for childcare, they face risks to their personal safety on their way to and from the gym, and they must overcome stereotypes and prejudice associated with participating in a sport that is often seen as being ‘for men’. To successfully engage young women and girls boxing programmes have to be mindful of these constraints and take steps to remove barriers to female participation.

This includes ensuring transport is available, scheduling training for times when young women and girls will be available, and increasing the visibility of women in the sport so that newcomers have relatable role models to look up to.Some young women and girls want to train boxing to get fit, and build strength and flexibility, some train for the social interaction and sense of belonging, others dream of being champions. Key to using boxing for young women’s personal development and empowerment is being able to respond to each boxers individual needs and interests in relation to the sport. Kerone’s personal success has been inspiring and motivating for young people, especially young women and girls. In addition to her own training, Kerone supports the delivery of boxing sessions in her home community as an assistant coach, so she is regularly present in the gym to encourage others. This is more powerful than the impact any distant celebrity boxer could have because Kerone’s success feels more real and achievable. By giving back to her community Kerone is also demonstrating that champions aren’t just made in the ring.