A snapshot of the “Ciclovias Recreativas” programme 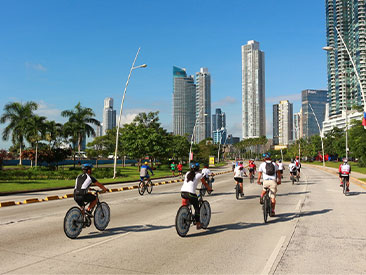 To recover the life of the city, generating spaces for recreation and where it is possible and enjoyable to play and perform physical activity, as well as to carry out cultural and educational activities that encourage coexistence and promote healthy and sustainable lifestyles.

City governments can find in the Cyclovías recreativas an effective and affordable program that promotes health, local economic development and social cohesion in their communities.
The promoters and main organisations at the continental level that develop Recreational Ciclovías, are gathered around the Recreational Cyclovías de las Américas Network (CRA Network).

How to develop a Ciclovía Recreativa?

The basic steps to develop a recreational cycle path can be summarised in the following points:

Streets that are closed for a few hours to the passage of motorised vehicles ensure that people can cycle, rollerblade, skate, or simply walk or jog safely. The initiative has been repeated in different communes of Chile and in the whole continent to promote physical activity. According to recent academic research, this type of initiative not only strengthens social cohesion in cities, but also brings people closer to meeting the minimum goal of 150 minutes of physical activity per week as recommended by the World Health Organization (WHO).

On average, people today spend 113 minutes doing some type of activity in the closed streets and 69.1% say their health is better or much better than a year ago. Regarding the users, the average age is 37.1 years old and the main activity is cycling (68.4%), followed by jogging (17.1%), other (9.8%) and walking (3,7%). Users’ main motivations are doing physical activity of recreational type, taking care of their health and enjoying discovering the ctiy in a different way.

However, according to Professor Rodrigo Mora de la Universidad Diego Portales, Santiago, Chile, this type of initiative in the country does not have the financial support from the State that would allow continuity over time or extension of the project to other cities. As for Daniela Godoy, the Executive Secretary of Eligir Livir Sano (Choose a healthy life), cycling has benefits for physical, mental and environmental health and there is evidence that it reduces the risk of obesity and chronic diseases, improves the quality of sleep and reduces carbon dioxide emissions into the environment. These are all the reasons why initiatives that promote bicycle use have been taken with Ministries such as Housing and Transportation. Daniela Godoy reports that the Chilean State is working on a bicycle use policy and is building car park lots close to metro lines. Sandra Mahecha, Med. Doctor specialised in Sport medicine and physical activity at Universidad Mayor, says that “the current WHO recommendation on 150 minutes of physical activity a week recommended on any number of days of the week is more powerful than the stimulus of being regular”. In regards to prevention from diseases, it is proven that
“although the recommendation is not reached, any minute is better
than nothing,” she insists.

Another result substantiated by the study published in the Medical Journal of Chile is related to the way the city is “used” by its inhabitants. According to Pr. Mora, this type of activity strongly contributes to social cohesion in cities, because it allows people from different social and geographical backgrounds to take ownership of the urban space. It is visible in the urban areas of Santiago Centro, Andrés Bello and Pocuro with the Central RecreoVías. “In most urban cycleways, people meet friends. In very local areas such as La Florida or Irarrázabal, people go with family, limit their trips outside the city, interact more in a neighbourhood square. While other Ciclovías recreativas that are empty during the week are now frequented during the weekends” says Mora. The Santiago Centro Ciclovía recreativa is one of the most attractive ones. A study showed that participants came from 17 cities/areas and, on average, travelled five kilometres to reach it. Pocuro area attracts people from 16 areas who travel just over four kilometres to reach this site. 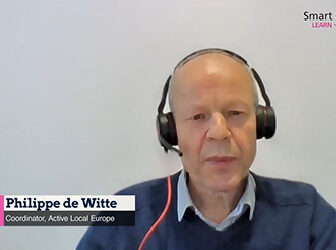 Philippe de Witte, Coordinator, Active Local Europe shares best practices and tips on how cities can encourage their citizens to be physically active. 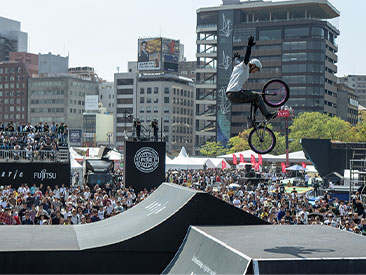 Actions sports competitions have evolved from niche events that take place in intimate setting into large scale events, such as fise, that attract hundreds of thousands of spectators each year. 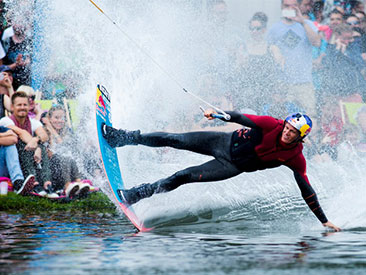 Munich, Germany: How the youth keeps the Olympic legacy alive

Initiated in 2014, mash is a successful and developing action sports event organised in the famous munich olympic park. combining top level action sports with a laid-back cultural spirit and lifestyle.