Athens, Greece: The city wants visitors to make jogging part of their journey 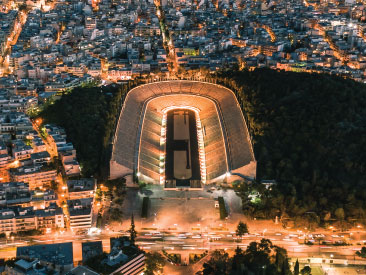 “The City of Athens is hoping to motivate a new generation of local runners and visitors to start jogging in the city.”

From a historically grounded marathon to running paths for all, the Olympic City of Athens has made the bet on easing sport practice within the city, for the pleasure of both locals and tourists

Athens claims some of history’s first running champions as well as the world’s oldest city streets that are today vibrant as ever. It’s no surprise that both amateur and professional runners want to hit the terrain around the Greek capital and connect with its storied past. Now the City of Athens is hoping to motivate a new generation of local runners and visitors to start jogging in the city. It’s part of a strategy to spark development and inspire tourism by focusing on quality of life across the city’s 129 neighbourhoods.

Athens runs deeps in the history of sport. For the 1896 Athens Olympics, the first Games sponsored by the International Olympic Committee, the organisers created a rugged cross-country race that began in the small village of Marathon and ended in the centre of Athens. The route was inspired by ancient stories of a soldier named Pheidippides who ran the 42km route at a breakneck pace to deliver news of victory against invading Persian forces in 490 BCE. Nearly 2,500 years later, the winner of the first Olympic Marathon was Spyros Louis, a young watercarrier who gave Greece its first gold medal victory, cementing the connection between ancient ideals and modern competitive sport. The annual Athens Classic Marathon has followed the original route since 1972, rightly calling itself “The Authentic.” A half-Marathon is contested in the city centre annually in March and is sponsored in part by the City of Athens.

Running routes for all

This is Athens, the Official Visitors Guide to the City of Athens online at thisisathens.org, is putting more classic routes on the map to inspire travelers to pack their training gear when they come to Athens. The editorial team asked local runners to plot courses that take in the Acropolis and the city’s varied landscapes. One of the most glorious morning runs begins on the pine covered paths below the Acropolis, weaving between ancient theaters and archaeological sites and along the historic streets of Thiseio and Plaka. The home stretch passes the Panathenaic Stadium with its all-marble seating reconstructed for the first Olympics, and the site of the finish line for the Classic Marathon. Running in Athens sure can be interesting, but it is not always the easiest place to run. September through April offer ideal weather for training, while July and August regularly have temperatures breaking 30C (86F) in the middle of the day. The landscape features hills of all sizes for intensive training, while the flat surfaces are often busy with pedestrians and car traffic during working hours. The City of Athens has begun investments that will make walking and running easier in the coming years. This year the city began repaving 50% of the roads across the city to take care of potholes and debris that have accumulated over the last decade. The city is adding new park spaces, repairing water fountains, and working to lower summer temperatures by creating green corridors that help move air through the city.

city and sea: a runner’s guide to athens

“The mission of VisitAarhus is to develop tourism and promote the Aarhus region as a sustainable destination for holiday and business tourism.”