Sport Is Your Gang, an initiative from IFMA

In September 2020, a new Play Space in the Klong Toey slum area of inner-city Bangkok opened up, in collaboration with Right to Play! This new structure – created for youth to do sport, to learn respect and tradition, to practice a healthy lifestyle and to make friends – shows the vitality of the “Sport is Gang”programme.

The International Federation of Muaythai Associations (IFMA) is strongly committed to using sport as an inspiration tool for the youth and mostly targets its actions towards youth that find themselves on the wrong path in life. The Sport Is Your Gang (SIYG) initiative was launched after an M.O.U. was signed between IFMA and the Peace and SportOrganisation (P&S) in 2011. Giving back to communities is a central part of muaythai’s values and SIYG provides an important platform for increasing social benefits in communities. As a worldwide project, Sport Is Your Gang shows how sport federations can play a tremendous role in reaching out the youth.

What is the reasoning behind Sport Is Your Gang ?

Combat sports have become known as a platform through which disadvantaged and marginalised youths are able to bring structure to their lives, learning skills and core values that will aid them in their development whilst being supervised in a supportive environment. Within disadvantaged and/or marginalised communities, it is not uncommon for youths to find themselves on the wrong path, particularly if they have faced a challenging upbringing. Even those fortunate enough to have had a fair start in life can still find themselves in a social group or situation from which a downward spiral can begin, placing them at increased risk. This, when added to existing socio-environmental stress within communities (such as high crime rates, fewer opportunities for education and employment) can further perpetuate a vicious cycle.

In many martial arts such as muaythai, competition is an objective that is truly secondary to goals such as self-improvement, group participation, and the joy of learning for its own sake.

Sport Is Your Gang targets youths from challenging backgrounds, encouraging them to take up muaythai training and, through their participation in training and dialogue programs, to be inspired for positive self-development and a healthy lifestyle. Rather than belonging to a gang or participating in a violent lifestyle, the spirit of the project is that sport can become a family, a team and a community.

Within communities facing economic hardship, high unemployment rates, with large new immigrant populations, or in very urban environments, youth can find themselves feeling lonely, alienated, victims of crime or bullying, and simply bored. Without obvious opportunities for self-advancement, they may also be drawn into gangs or behaviour which is damaging to themselves and their local communities.

Relying on champions and peers

IFMA believes in the potential of sport, and muaythai, in providing an alternative focus, and therefore a path away from such destructive activities. Training together gives youth the opportunity to build a healthy lifestyle, learn skills and self-defence techniques, gain self-respect and self-esteem, and importantly find a safe and trustworthy environment, building links with their peers and belonging to a community.

IFMA recognises that the youth generation is society’s most important asset for the future. The National Federations can use their best assets: their muaythai champions, to speak and reach out to youth who find themselves on the wrong path in life.

There is an important role for the current and upcoming champions, trainers, entourage and general participants of muaythai in helping to make the world a better place.

The social and mental benefits of muaythai

The overall effect of practicing muaythai is that individuals increase their self-esteem, focus of control, and personal discipline. Apart from developing social and traditional values, the practitioner also follows a strict regimen and protocol. Firstly, active participation in any martial art leads to increased attachment between athletes, their teammates and instructors. Such bonds have been shown to reduce anti-social behaviours. Secondly, competitive participation builds an athlete’s commitment to a particular cause and to conventional lines of action, so to deviate would mean a loss of athletic standing. Thirdly, the time required to practice and succeed in muaythai decreases, by default, the time available for socially deviant behaviour. Furthermore, martial arts such as muaythai have an advantage over traditional collegial or familial institutions. Muaythai instils discipline and respect towards others. In addition, it provides opportunities for involvement in a legitimate activity with a consistent reward structure. In this way, muaythai and martial arts in general provide an alternative route to success that prevents repeat offences. Where traditional institutions such as schools, families or the criminal justice system fail to prevent crime, martial arts can succeed. An errant youth labelled as a failure in school may succeed in martial arts and learn values such as respect, honour, tradition, excellence and fair-play, five of the fundamental pillars of muaythai.

As a human-sized Western capital city, Stockholm faces some common urban problems: juvenile delinquency, immigrant integration challenges, and crime. The Frysbox project works with all types of youth: victims of crime, socially vulnerable youth, newly arrived immigrants who don’t speak the language yet, but also any youth without social problems who simply want to participate in the Frysbox project. The project targets youth living outside or on the fringes of society, in order to give them a place to connect. Some come from broken homes or have no family at all. Frysbox provides a place with a mixed group of young people, that come from different backgrounds. Frysbox tries to provide a safe place for youth to grow and develop in the right direction. The Sweden’s Frysbox project, founded in 2007 by two Swedish muaythai champions, successfully uses a muaythai training and dialogue program in cooperation with the Fryshuset organisation which has agreed to be a guide for National Federations seeking practical help in building their own local “Sport Is Your Gang” projects.

The project involves 26 cities across Mexico. Children live in urban neighbourhoods that lack resources and do not have access to public support institutions. Such conditions leave children at risk of both engaging in and being victims of crime, drug use, and social and mental disabilities. Once a week, 3000 children in 220 groups meet in public spaces with instructors to learn muaythai, grow as a team, and create a community. Through instruction of muaythai, children develop social skills, the management of negative emotions, a sense of belonging and teamwork, discipline, and healthy lifestyles with the aim of creating positive change in their social environments. Together and in conjunction with community mentors, sponsors, and volunteers, these children also develop strong support networks.

In Cape Town, participants come from poor neighbourhoods where gangs and drug abuse can be pervasive elements of their environments. Violence and crime abound, and self-esteem can be very low for youth who feel they have no opportunities and a small future. The South African Amateur Muaythai Federation (SAAMF) has long been a pioneer of “Muaythai Against Drugs”, a program designed to target school-age children, encouraging them to engage in sport, such as fitness muaythai, pursue their studies and avoid drugs. The cultural aspects of muaythai were a focus, with emphasis on the ritual Wai Khru dance and incorporating South African culture through drumming circles. In its evolution towards SIYG, SAAMF has expanded its age range to address the challenges and decisions facing older youth. Muaythai training offers mentorship and training in martial arts values, in self-discipline and self-control. Emphasis is placed on having a safe environment and a community that one can trust. Training takes place every Saturday. SAAMF has used a “development team” for the past five years, including youth who come from its social project training programs, on national teams which compete nationally and at the international level. Future goals include the construction of a “Muaythai Home” in the development townships, complete with a fitness centre and training areas, seminar and resource rooms, and dormitories.

In Buenos Aires, social assistance is required for street children or children in need, who are socially excluded in Bajo Flores, one of the neighbourhoods in the capital city. A non-profit organisation called Sol Naciento has existed in Bajo Flores since 1998, aiming to serve the physical, psychological and social needs of a segment of the population which is not covered by government institutions or services. Sol Naciento is established in the community and provides, on average, 700 meals a day and a place where families or people in social difficulty can take refuge. Programme: “Muaythai para Todos” (Muaythai for everyone). The sport of Muaythai is used as a social inclusion program for children who face various problems which marginalise them, including homelessness. The muaythai community in Buenos Aires also donates resources and provides social assistance to Sol Naciento.

Operating in five cities every Sunday with around 250 kids that have been displaced by violence and belong to an ethnic minority, the programme is strongly based on education. In addition to  muaythai lessons, kids are taught martial philosophy and values, and the meet world champions and elite personalities in the world of sport so that as they know their stories, become inspired, dream and convince themselves that it is possible and that they can make it.  “Sport is your Chance… Every child deserves a Champ!” is the motto of this initiative set up in 2017 which give the kids a comprehensive educational training that allows them to be resilient, healthy, productive and happy adults, who contribute positively to their community and society. In 2019, the project was awarded with the SIYG Social Initiative of the Year.

The Discover MuayThai academy was founded in 2015 as a social enterprise by Imran Harith, 30, and Khairul Azri Mohamad Halid, 32, who used to be active members of MY Harapan, a non-governmental organisation. Imran said he was inspired to set up the academy after he came across the muaythai camp concept in Thailand where hostel facilities and training were provided to abandoned children, orphans and victims of human trafficking. Discover MuayThai is a “spin-off” of the camp concept and to make it a reality, Imran and Khairul Azri collaborated with local Thai boxing training provider Dragon Muay Thai, which has a training facility in Jalan Alor, to use their centre to train youths taken under their wings. They aim at helping school dropouts, as well as youths who are poor, homeless and facing problems and devised a special training programme for them. Training module does not only focus on developing the physical aspect but also mental and spiritual aspects. The programme combines running, English or religious classes and muaythai training. At night, the trainees assist coaches at the Dragon Muay Thai training centre to train students.

“I learnt to be more responsible after training for four months at the academy and it is helping me in my career. My life has been transformed and I’m much more disciplined and have better time-management skills now,” said Muhammad Shahmi Ismail, 22, who used to play truant and was expelled from school three times due to disciplinary issues. He is now employed as a fitness trainer at a gymnasium in Puchong.

sport is your gang, ifma 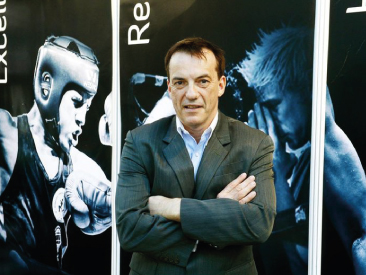