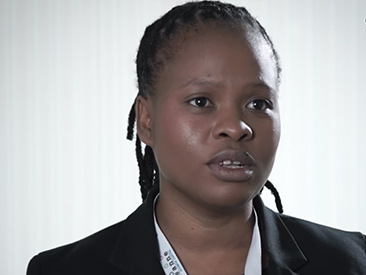 We envision a sustainable sporting culture based on gender equality that enables and values the full involvement of girls and women in every aspect of sport and physical activity.

As a former athlete yourself and now holding several leadership positions within African sports governing bodies, what would you say are the biggest barriers to girls and women’s participation in sport?

My position enabled me to have a broad vision of women’s sport, including the issues that women face in terms of sport participation. From my perspective, I believe there are three main factors that prevent women and girls to be physically more active.

First, the resources allocated to women’s sport is by far smaller, as men teams will often be given more attention and more resources for preparation.

Second, in several parts of the world, including Africa, the patriarchal system in place has made women doubt their capabilities from a very young age – distancing them significantly from sport.

Last but not least, there is a lack of infrastructures that suits women lives. Most of them becoming mothers at an early stage, they focus on their children’s education. The need for specific structures such as nurseries is of utmost importance for them to be able to allocate their time to other activities, including sport.

As the Secretary General (2014-2018) of the International Working Group on Women and Sport (IWG), could you please tell us a bit more about this organization and its objectives?

We envision a sustainable sporting culture based on gender equality that enables and values the full involvement of girls and women in every aspect of sport and physical activity.

Our mission is accomplished through the action and influence of the IWG as a catalyst, engaging governmental and non-governmental organizations and individuals for the advancement and empowerment of women and sport globally.

Our main objective is to promote and facilitate the development of opportunities for girls and women in sport and physical activity throughout the world.

The IWG held its quadrennial Congress, with you being in charge of the organisation. What are the three main conclusions you draw from this event?

Gender inequalities in sport is now for sure an issue that the world is more aware of!

It is definitely time to act upon it, and sports governing bodies have a fundamental role to play here: it is key to engage International Federations to cascade the importance of women and sport within their own structures.

Equally important is the need to profile more women in sport to serve as role models globally.

Could you share with us how the IWG, in the past few years, has contributed to ease the access to sport for girls and women specifically in Africa?

Concrete actions have been undertaken by the IWG to facilitate access to sport for girls and women in Africa.

First was the creation of the foundation of Women in Africa which gives the possibility to attend IWG conferences. Second, the establishment of various partnerships that aim at enhancing women’s leadership in Africa with several institutions. This includes partnerships with Anita White Foundation and the University of (through IWG office in Botswana) to organize a “bi-annual women and sport leadership academy training”.

The first training was held in Gaborone (Botswana) just a week before the IWG conference, and in 2015, IWG partnered with UNODSP to offer the possibility to African girls to participate to the leadership training academy.

Furthermore, the hosting of IWG African Women and sport Conference in Gaborone (Botswana) in October 2016 where the infrastructures in place to support women in sport and the promotion of women’s sport across the African continent were at the core of the discussions during the conference. IWG lead the process of resuscitating Africa women and sport structure which has culminated in Women Sport Africa Network.

And a more difficult question for the end: what does the future look like? What still needs to be done to achieve gender equality in sport?

The Gaborone conference reaffirmed the need for the IWG to continue its operations. Indeed, more and more countries and organisations show a strong interest in hosting the next editions of the IWG conference. To keep them engaged, it is of course, of utmost importance that next hosts maintain close relationships with the participants of the 7th IWG world Conference through constant updates.

Also, the discussions regarding the creation of a “Women and Sport Observatory” have been initiated – an important step to move forward and bring positive change for women and girls.

However, a lot is yet to be done. The need to implement the IWG Botswana Big 5 is urgent to further improve the current situation and increase women’s sport participation. “Gender” should be effectively integrated into all sport structures and processes and monitored very closely to achieve gender equality in throughout sports.

All the 3 legged legacies (Botswana, Africa and world) should be implemented.